April 2018 is when the man of the house reaches a half century , so this month a lot of the energy is spent organising a shindig to celebrate !

Other than our gorgeous man, it’s been all about babies this month.

We started the month with lambs popping out all over the place , Toms sheep were first,

but with all this new life there has to be a few casualties, the first was a new mum leaving behind a little lamb that became

A flurry of friends added to the fun over Easter and lamb feeding was an added bonus , this is Abby doing a night feed ..

The Herdy’s soon started to catch up and within the first week we had molly and polly’s singles , a ram lamb we called Henry junior after his pops and a little wee ewe 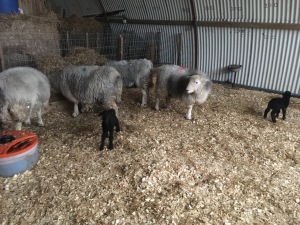 lamb .. (4th and 6th April) it was two weeks later (20th)that the triplets finally made their

I was so relieved that Lolly had birthed by herself without a hitch and soon proved herself to be an exceptional mom..Two ewes and a ram, the perfect finale to our first lambing season .

They were soon up and back out on the

Another set of babies we were planning were still unknown .. Nora’s artificial insemination last month seemed to have worked as she didn’t show any signs of coming into oestrus we promptly booked a vet visit for the end of the month ..

we got to wielding a trowel and started the mammoth task of clearing all the previous seasons plant debris .. the end result was a vast improvement and the spring bulbs really lifted everyone’s spirits.

I finally set to on seed sowing too after reading George’s blog and getting a bit motivated .. thanks G x

And back to lambs, as we all know Lauren has a real knowledge and love of prams so it wasn’t long before Twinkletoes went for a run in a maclaren ( and clearly not the shiny sporty fast type) .. oh and also got to sport a pink tutu just for fun !

Please don’t ring animal welfare , honestly the lamb loved the attention and to be fair

it really suited her..

Preparations for the party were coming on nicely, guests invited,band booked, porta loos sourced and paid for( W.C. in a field no less.. no honest that’s what the company’s called !) food ordered , tables and seating arranged barn dance style and finally Lauren’s cocktail bar built ..

So the finale for April was ‘ Grobfest ‘ , the Hubsters 50th birthday bash ..it had been months in the planning,

we had a whole weekend of bonfires, feasts, drinking,dancing and fun organised..

This is the kitchen crew enjoying a well earned glass of something lovely ..after A LOT of food prepping .. 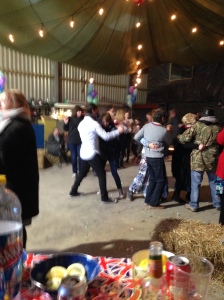 To round the month off beautifully we

booked a scan for Nora with the lovely Paula our vet

This site uses Akismet to reduce spam. Learn how your comment data is processed.